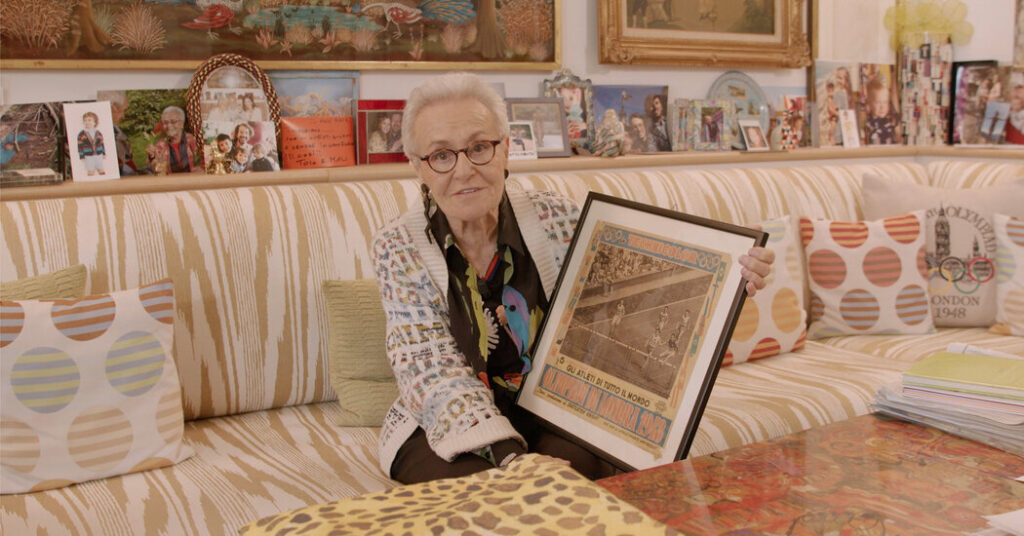 Just above Rosita Missoni’s bed hangs an Impressionist-style oil painting by the 20th-century French artist Jacques-Henri Lartigue. Set in a gilded frame, it depicts a garden scene of bursting red, white and orange blooms and takes up almost the entire wall. That the Missoni matriarch, who co-founded the namesake Italian fashion house — best known for its rainbow-hued, chevron-patterned knits — with her husband, Ottavio Missoni, in 1953, sleeps beneath a work that is so bold and vibrant makes a lot of sense. The piece also goes well with the Missoni patchwork quilt, made of cotton triangles printed with orange, pink and purple stripes, that covers the bed itself.

Art, flowers and fabrics are layered throughout the house, a modern and airy two-story villa in Sumirago, some 30 miles northwest of Milan. Rosita and Ottavio (shortened by his family to Tai) built the home in 1971, a few years after breaking ground on the Missoni knitwear factory, which is still in operation and located barely a minute’s walk away, down a wooded lane. “We wanted to live all the time where we would have liked to spend our weekends,” Rosita says of this verdant hollow at the foot of the Italian Alps. She especially liked that the property affords a view of Monte Rosa, which she could also see from her childhood home in the nearby city of Golasecca and which, at 90, she still finds delightful. “Most days, I wake up and take a photo of the mountain,” she says, scrolling through her camera roll past dozens of pictures of the pink-tinged peak. Then, before making her way to her studio at the factory, she might take a stroll through the property’s grounds and garden — a softly sloping lawn penned in by towering trees and blooming bushes — clipping coral peonies and blush pink dogwood blossoms as she goes. “I like all flowers except for white ones,” she pronounces while standing next to a neon magenta azalea. “I need to be surrounded by color.”

Back inside, in the glassed-in dining room overlooking the garden, Rosita arranges the stems with an expert’s eye, plucking at petals damaged by a recent frost, but says, “Tai was the real gardener. Once, at our old home, I left for a weeklong trip to New York and came back to hundreds of new plants on the terrace. He’d created an entire jungle.” Ottavio is at the forefront of the Missoni family’s consciousness these days, as 2021 would have marked his 100th birthday and his and Rosita’s 68th wedding anniversary. Later, in the den, she points out a photograph, taken in the moments before his death in 2013, of the pair’s hands clasped above a comforter. Indeed, much of the house speaks to their time together — as spouses, parents, grandparents and business partners. Rosita first encountered him at the 1948 London Olympics — he was a competitor in track and field and she was a smitten spectator. They married in 1953 and soon after began producing knit tracksuits, which led to their first ready-to-wear line in 1958. International acclaim arrived in the late 1960s when editors like Diana Vreeland and Anna Piaggi began to champion their designs.

“He was sympatico … sympatico!” Rosita says of Ottavio, who was known for the rollicking parties he’d throw for their cabal of creative friends, one source of the home’s treasures. Take the paint-splotched palette given to the couple by Balthus that is hung in the living room. As the story goes, for many years Balthus was gifted a different Missoni cardigan by a dear friend each Christmas. When the friend died, the artist went straight to the source, and a new friendship, between him and Rosita and Ottavio, blossomed. Also in the living room is a Murano glass tea set from Piaggi. Perched on top of the glass case housing the set is a brass crown from the interior designer Eva Gunderson, who worked closely with Missoni for several years, that’s campily decorated with some of Rosita’s favorite things: another photo of Ottavio; loops of pink and orange Missoni yarn and orange Missoni ribbon, the same kind Rosita ties at the end of her long braid; and illustrations of crustaceans — in her younger days, she was a committed scuba diver, and often dove for tartufo di mare clams off the Dalmatian coast.

But nostalgia isn’t the home’s primary guiding force. Rosita has continued collecting on her own and is known as a fixture at art fairs across Europe. Some of her favorite works in the house are a painting of a ballerina by the Italian Futurist Gino Severini that can be found in the living room and another one of preening parrots by his fellow Futurist Fortunato Depero that hangs opposite the terrace door. Upstairs, in her bedroom, there are sketches by the pioneering early 20th-century artist Sonia Delaunay, whose vivid, Cubist-adjacent quilts and oil paintings feel like an obvious artistic and spiritual predecessor of Rosita’s own creative oeuvre.

While she no longer oversees Missoni’s ready-to-wear collections — her daughter, Angela, took over in 1997 and stepped down in May of this year — Rosita remains the creative director of Missoni Home, the interior design and furnishing branch of Missoni’s color-forward universe. This September, she will present Missoni Home’s latest collection at the Salone del Mobile in Milan following the design fair’s year-and-a-half hiatus on account of the pandemic.

Though much has changed for the family in the 50-plus years since Rosita and Ottavio settled in Sumirago, the home endures as a base for the family. It’s the de facto venue for birthday parties and celebrations, when all four Missoni generations are present and the home’s floor-to-ceiling sliding glass doors are pushed open, with revelers spilling out, glasses of wine and plates of risotto in hand, onto the terrace and lawn. “People end up in every part of the home,” says Rosita. Fittingly, her most favorite work of art in the house is an iron sculpture that sits on the entranceway table of a too-tall man sprouting, “Alice in Wonderland”-style, out of a house. “I bought this for Tai for his 80th birthday,” she says. “I always told him, ‘This house is too small for you.’ Because he always wanted to be out and about.” The couple were regulars, for instance, at Milan’s La Scala opera house, and designed the costumes — purple knits and red tartans — for the theater’s 1983 production of Gaetano Donizetti’s “Lucia di Lammermoor” starring Luciano Pavarotti. But, despite having an apartment in Milan, Rosita insists they never once spent a night there, always choosing to return to Sumirago after whatever event they’d attended, even if it meant they wouldn’t get there until the wee hours of the morning. “Tai liked to say, ‘It’s not about where you fall asleep,’” she recalls, “‘but where you wake up.’”