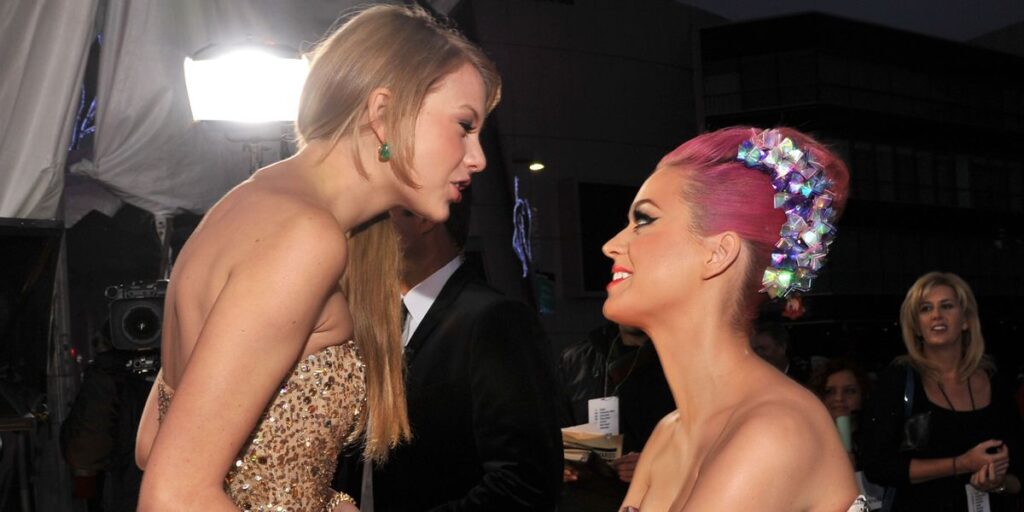 When Katy Perry called into the U.K.’s Capital FM on Friday, host Sian Welby told Perry about the fan theory that she and Taylor Swift might be cousins. Apparently, one fan did some research on the family history website My Heritage and came up with this connection.

“Well, we fight like cousins,” Perry replied. She went on with this earnest reply: “Wow, I’m gonna have to ask her if this true, or if we should, like, get blood tests together…It’s cool because you can just, like, spit in a tube.”

Although we don’t know the validity of the Perry/Swift family history, we do know their feud history. By the end of 2013, rumors were going around that the two former friends were no longer very friendly.

In an interview with Australia’s The Examiner, dancer Lockhart Brownlie said he and two of Perry’s other former dancers left Swift’s Red tour in 2012 and went to Perry’s Prism tour instead.

“Obviously we were with Katy for two and a half years, she’s like family to us,” he told the outlet. “So we were, like, ‘Absolutely.’ We weren’t really dancing in Taylor’s tour anyway, so I had got a little bored, and I really wanted to do a promo tour.” He added, “Taylor is very untouchable. When we did see her, we had so much fun with her, but she’s a lot more protected than Katy.”

This seemed to stir things up between the two, and by September 2014, we had our answer. In an interview with Rolling Stone ahead of the release of 1989 and her song “Bad Blood,” Swift alluded to a conflict with an unnamed celebrity.

“For years, I was never sure if we were friends or not,” she said. “She would come up to me at awards shows and say something and walk away, and I would think, ‘Are we friends, or did she just give me the harshest insult of my life?’ She did something so horrible. I was like, ‘Oh, we’re just straight-up enemies.’ And it wasn’t even about a guy! It had to do with business. She basically tried to sabotage an entire arena tour. She tried to hire a bunch of people out from under me. And I’m surprisingly non-confrontational–you would not believe how much I hate conflict. So now I have to avoid her. It’s awkward, and I don’t like it.”

There’s a lot more on that timeline, and Perry’s appearance in Swift’s 2019 video for “You Need to Calm Down” signaled their reconciliation. Now, who knows? Maybe they really are cousins. This year has been so wacky that anything is truly possible.

Hilary Weaver
Hilary Weaver is a freelance writer based in New York who writes about politics, queer issues, Meryl Streep, Glenn Close, and every woman the Queen has ever made a dame.