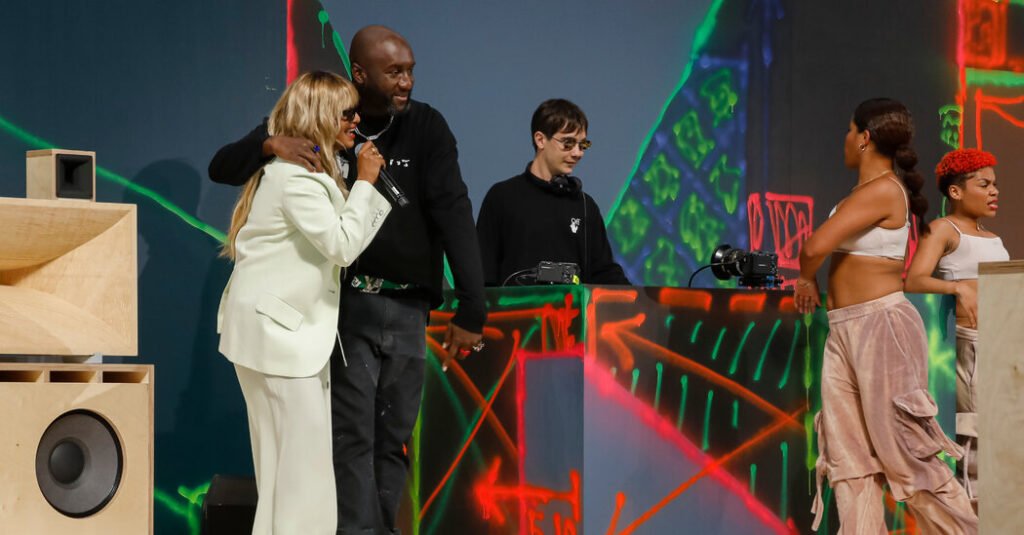 On Tuesday, LVMH announced it was acquiring a 60 percent stake in Off-White, the luxury streetwear brand Mr. Abloh founded in 2013 and which he still designs, alongside his job as artistic director of Louis Vuitton men’s wear.

In addition, Mr. Abloh, 40, will be taking on a bigger role within LVMH, working across such categories as Wine and Spirits (LVMH owns Krug, Dom Pérignon and Hennessy, among 30 brands) and Hospitality (more than 50 hotels, including the Cipriani in Venice and Le Manoir aux Quat’Saisons in Oxfordshire), smashing silos and bringing more diverse voices to a variety of brands.

“I’m getting a seat at the table,” Mr. Abloh said cheerfully, speaking by Zoom from Chicago, where he lives.

Though his job definition is still fairly nebulous (chief disruption officer?), the news gives Mr. Abloh, a first generation Ghanaian-American, a fairly broad remit and makes Off-White one of the rare brands in the LVMH stable not rooted in European heritage.

It also marks a potential new stage in the evolution of LVMH, which has emerged from the pandemic with its shares up 60 percent this year, and has had such a good first quarter (revenues are up 30 percent compared to the same period in 2020, pre-Covid) that its chairman, Bernard Arnault, was briefly the richest man in the world.

“We’re not trying to emulate a model that already exists,” Michael Burke, the chief executive of Louis Vuitton, said of Mr. Abloh’s new role. “It’s more like what Bernard Arnault did when he bought Dior and decided to create a federation of luxury brands.” That is, shake up the status quo.

Now Mr. Arnault is trying to kick his own organization out of its comfort zone with Mr. Abloh as the zeitgeist whisperer.

The new arrangement is akin to the collaborations Mr. Abloh specializes in — with Ikea, Nike, Champion, Vitra and Equinox, to name a few — but pumped up on a protein drink and with long-term implications. Mr. Abloh isn’t just getting a cool-sounding new gig; he’s getting an equity stake in whatever cross-pollinated projects he develops.

“We try to make the founders turn over in their graves, but in the best way,” Mr. Burke said. “Some of our biggest brands have a tendency not to see it’s in their best interests to stay plugged into the contemporary world.”

Being “plugged into the contemporary world” has not been a problem for Mr. Abloh, who is often compared to Jeff Koons, refers to himself as a “maker” rather than a designer and touts the “3 percent approach,” which holds that changing just 3 percent of a design is enough to make it qualify as new.

LVMH has been vocal about its commitments to diversity, equity and inclusion, though it has an entirely white board and executive committee. It did not help that LVMH put Fenty, its short-lived experiment at building a direct-to-consumer brand from scratch with Rihanna, on hold last year (though the company remains involved with Rihanna through her cosmetics brand).

The new arrangement with Mr. Abloh and Off-White is part of a flurry of activity on the part of LVMH. It bought Tiffany last year in the largest deal in luxury (its new ad campaign reads: “Not your mother’s Tiffany”). Last week it announced it was taking a minority stake in Phoebe Philo’s new namesake venture; last month it reopened the renovated department store La Samaritaine with an appearance by President Emmanuel Macron; and later this year the ultraluxury Cheval Blanc hotel and Dior spa will open in Paris.

The deal also positions Off-White, which is most famous for its ironic deployment of quotation marks (and tendency to quote not just phrases but, arguably, styles) for what Mr. Abloh terms “generational growth.”

Though Off-White, the company, will still be operated by New Guards Group, the Italian manufacturing company that owns the license for the brand (and is itself owned by Farfetch), Off-White LLC, which owns the trademark, will be incorporated into the LVMH Fashion and Leather Goods Group. Terms of the deal were not disclosed, though Mr. Burke said “it took about five minutes to come to an agreement.”

LVMH has a history of acquiring or buying a minority stake in the personal brands of the designers it hires to work with its heritage labels. This is a pattern it developed with John Galliano when he was the creative director of Dior (when he was fired, he also lost his rights to his name); Marc Jacobs, whose brand is still part of LVMH; and JW Anderson, the creative director of Loewe.

Still, according to Mr. Burke, Off-White is the largest such brand LVMH has ever acquired, with 56 stores globally, and a presence in 40 countries.

Mr. Abloh said he hopes the deal will ensure that Off-White will be “on historic corners all over the world for years to come.” He also said the partnership would be used to expand Off-White into categories like cosmetics and home wares, as well as to grow the leather goods side of the business.

Mr. Abloh, who has a degree in engineering and no formal fashion training (his mother, a seamstress, taught him to sew), began his relationship with LVMH in 2007 when he was creative director for Kanye West and the two interned at Fendi, the Italian brand. In 2015, he was a finalist for the LVMH prize for young designers, and in 2018, he was named men’s wear designer of Louis Vuitton.

In 2020, after the murder of George Floyd, Mr. Abloh established the Postmodern Scholarship Fund to help Black students and promote diversity in fashion. Louis Vuitton was one of the first backers of the fund, which raised about $1 million; three beneficiaries of the scholarship are interning at Vuitton.

“The idea is to develop a trajectory I wish I had had when I was starting out,” Mr. Abloh said . His new role, he added, is to open doors for nontraditional luxury candidates at all points of the industry, from entry level to the top. Maybe especially at the top. “I focus on relevancy,” he said. “Relevancy is my metric.”