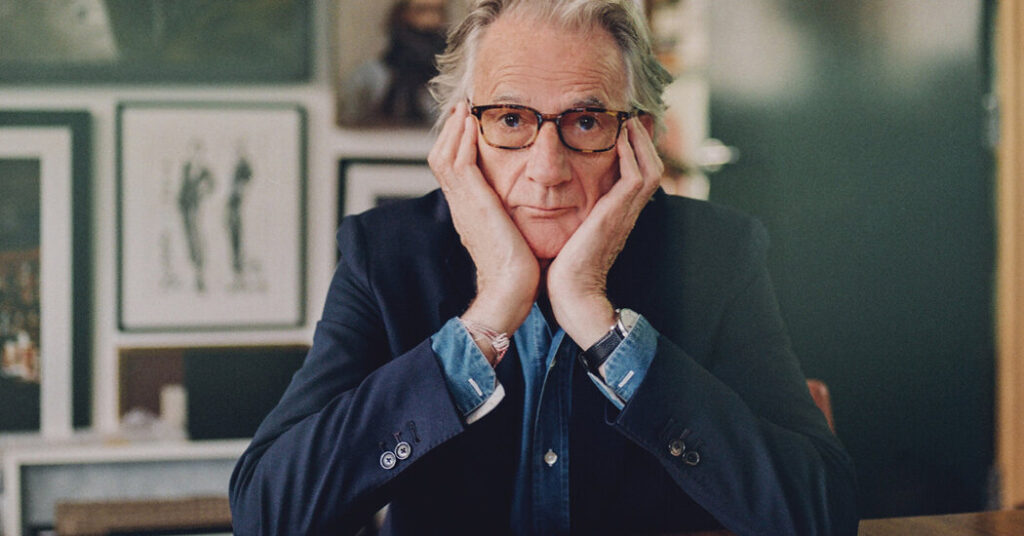 “My childhood was very gentle,” says the designer Paul Smith, who grew up in Nottinghamshire, England, the youngest of three children by eight years. “My mother rather beautifully told me, ‘Darling, you were a gift from God’ — a very polite way of saying I was a mistake,” adds Smith, 74, who is similarly well mannered. With his siblings already out of the house, Smith spent his adolescent years luxuriating in the company of his parents, snapping photographs that he’d develop with his father in the family attic and taking long bike rides through the Midlands. At 15, he left school intent on becoming a professional cyclist, but was forced to give up the pursuit after suffering a bad crash two years later, at which point he started spending weekends in London, hanging out with an art and music school crowd that opened his eyes to the cultural currents of the 1960s. Often, he’d go to concerts and hawk homemade silk-screened T-shirts he’d made to whomever was performing (Rod Stewart, Eric Clapton) and use some of his earnings to pay for the gas to get home. “I came from a working-class family and I had no money, no education,” says Smith. “I had to make it work, and I liked clothes.”

He liked them enough that in 1970, with the encouragement, guidance and help of Pauline Denyer, his then-girlfriend and now-wife, who studied fashion at the Royal College of Art, Smith opened a windowless shop, just under 10 feet by 10 feet, in his hometown. On the racks were some of his own designs, such as double-breasted flannel coats with pearl buttons and flared corduroy trousers with cuffed hems. “Pauline was the one who first taught me how to cut a pattern,” says Smith, who showed his eponymous brand’s first full men’s wear collection in Paris in 1976 and was immediately heralded for his irreverent take on suiting. An affinity for stripes and various sartorial winks, such as a loud lining on a jacket or brightly colored stitching around a buttonhole, have remained trademarks of his ever since, and he’s become a stalwart of U.K. fashion, with outposts in 70 countries. Though expertly crafted from the finest of textiles, his work is a reminder that tailoring need not be stuffy, and his spring 2021 collection, which he presented last month, showing two-button, wool-mix suits in lavender and mint worn with sandals and without shirts, was no exception. It was inspired by a past trip to Havana, something that wouldn’t be so easy at the moment. But while it’s been a difficult year, what with the pandemic and much social strife, it’s also been a special one for Smith, as 2020 constitutes his brand’s 50th anniversary, which he’s marking with a monograph, out this week, that details his life and career through 50 of his favorite objects. Here, the designer elaborates on the elements of his style and singular approach to running his brand, which he’s proud to have kept independent. “We’ve just always enjoyed having a lovely day every day, saying please and thank you, and not being part of a big machine,” he says.