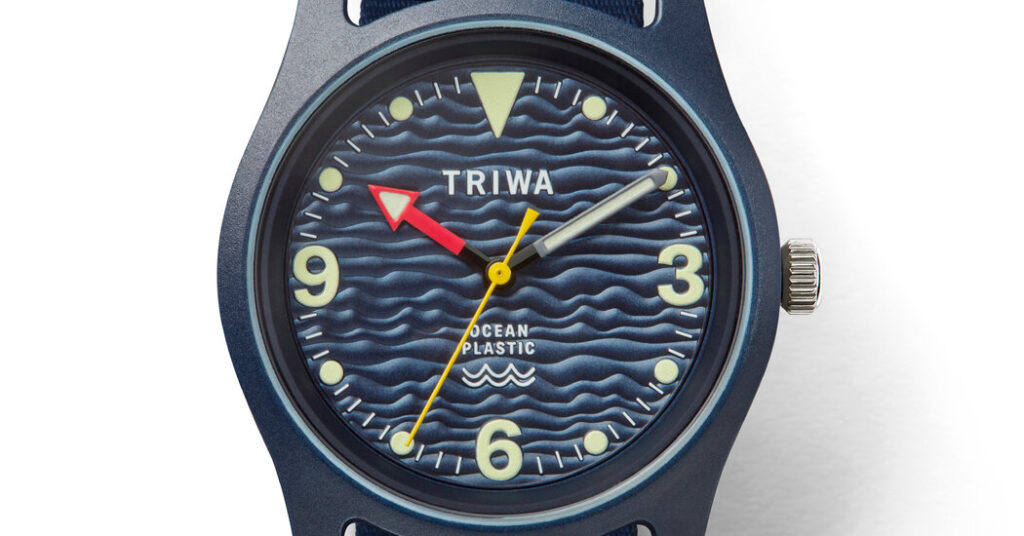 When Alexander Mehdi Bennouna, a former chief executive of Victorinox Swiss Army, co-founded a new watch brand last year, he did not name it after himself, like many watchmakers have done, or choose something that emphasized the company’s Swiss roots.

Instead, the collection, which introduced its first timepieces on Kickstarter in June, was called DecideAndAct.

Mr. Bennouna said the unusual name had a deliberate purpose: to stress the brand’s focus on social responsibility. “It’s a call for action,” he said in a phone interview from his office in Neuchâtel, Switzerland. “It’s not something that must come across as something obvious. It’s something that must question and raise interest.”

Admittedly, it is quite a mouthful. “It is a long name,” he said. “When you read it without the spaces, you think ‘What the hell is this?’” An abbreviation the brand also uses, d&a, is similarly enigmatic.

DecideAndAct is not the only watch brand that promotes environmental concerns as its main distinguishing factor — rather than, say, a complicated proprietary movement or water-resistant construction. Several new companies offer watches that are made solely with recycled and sustainable materials; frequently, donations to like-minded organizations are part of their business plans. And yes, their names are usually unconventional, too.

Take Triwa, whose name is an acronym for Transforming the Industry of Watches. (The brand’s tagline, Time for Change, is a more concise expression of that decidedly ambitious goal.) Based in Stockholm, the line was introduced in 2007 and initially aimed to alter the status quo in different ways: unconventional distribution (it was sold at Colette, the Paris concept store that closed in 2017, and Urban Outfitters) and comparatively low prices, starting at around 800 Swedish kronas (now $83).

A few years ago, its direction shifted. “We had a soul-searching moment and decided that the new way of transforming the industry was to make the industry sustainable,” said Ludvig Scheja, its creative director and one of the founders.

Ever since, Triwa has sold watches made of materials like recycled ocean plastic and metal reclaimed from firearms. On its website, the carbon footprint of each timepiece is listed, determined by a digital calculation tool from the Swedish tech start-up Doconomy. “What we want to achieve is to make people wear a watch to show that they care, not just about themselves, but about anyone around them,” Mr. Scheja said.

The Montreal-based brand Solios has similarly classic designs, with pared-down silhouettes. “Sustainability shouldn’t be a style,” said Samuel G. Leroux, the brand’s co-founder. “It should be a feature, or a way to produce the object.”

Each Solios watch has a solar-powered battery instead of the typical quartz battery that would have to be replaced (and discarded) periodically. The collection’s most expensive pieces are 350 Canadian dollars ($276).

Late last year the brand was certified as a B Corporation, an accreditation of social responsibility issued by B Labs of Berwyn, Pa. Mr. Leroux said that Solios — its name a nod to Helios, the Greek god of the sun — was the only watch brand that had received that certification.

As the brands’ watches are promoted as leaving a lighter environmental footprint than traditional watches, they also tap into what seems to be consumers’ growing interest in social responsibility.

“We actually realized that there are very few brands out there within the watch industry that have this very strong responsible positioning,” said Vasilij Brandt, a founder of Nordgreen, a Copenhagen-based brand introduced in 2017. “That’s why we decided to say, ‘You know what? This is a great opportunity for us to realize this and fill a gap in the market.’”

The company’s streamlined watches are priced at 1,195 to 2,095 Danish kroner ($190 to $333), and sold in stores in countries including Japan, Taiwan, Germany and Canada, as well as online.

Nordgreen’s watches seem to have resonated with buyers: Its sales last year were more than 100 million Danish kroner (almost $16 million), Mr. Brandt said. While Solios declined to offer revenue totals, Mr. Leroux said 52 of the brand’s 92 styles were sold out for part of the year. And DecideAndAct exceeded its Kickstarter goal of raising 30,000 Swiss francs ($32,580) in less than three weeks and plans to introduce a new range this fall that will be sold on its website.

The positioning seems targeted squarely at shoppers who are 40 or younger and who are concerned about the ecological impact of what they buy. “When you look now at the younger consumer — the millennials and the Gen Zs — they are much more interested in the emotional side of making sure that they don’t leave this planet worse off, and that can be translated in any product,” said Claudia Pardo, a partner at Innosight, a business consulting agency, who is based in its Lausanne, Switzerland, office.

Perhaps with that audience in mind, established brands also have been introducing watches with sustainable features. Cartier, for example, has introduced the SolarBeat Tank Must, a solar-powered version of its quartz tank watch, which is scheduled to go on sale this fall. In June, Shinola began selling the Detrola Sea Creatures collection, with cases and straps made from plastic recovered from the oceans. There are options from other companies, too, including Omega, Breitling and Panerai.

Environmental responsibility has simply become part of what many consumers expect from companies, including those specializing in watches, according to experts like Frederick Martel, the founder and chief executive of Chronos Agency, which advises luxury goods companies. He also is a senior vice president for MycoWorks, a company that supplies a vegan alternative to leather to brands like Hermès.

As he put it, “The end customer is looking at their favorite brands and saying, ‘What are you doing to help transform the world, or to make the world a better place for the next generation?’”